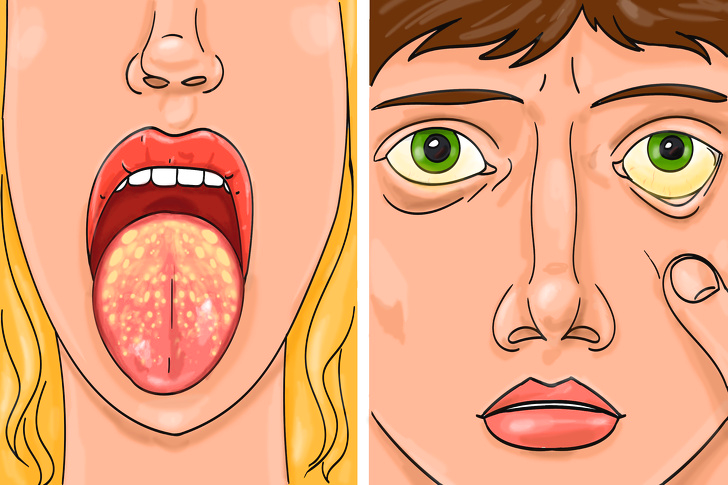 According to experts, in more than 40% of cases, doctors make misdiagnoses. This is mainly due to the fact that many symptoms can mean different diseases and that it is sometimes very difficult to reveal the right one.

We have compiled the most common ailments that can be disguised as something else.

1. Kidney stones in relation to the aneurysm of the abdominal aorta.

Kidney stones can be misdiagnosed like many other diseases, and an aneurysm of the abdominal aorta is the most dangerous of them. Both begin with very severe and acute abdominal pain, nausea or vomiting. An aortic aneurysm occurs when an abnormal bulge occurs in the wall of the aorta, which, if ruptured, can be fatal.

Doctors suggest that in a patient 60 years of age or older, who has never had a kidney calculus, an aortic aneurysm should first be excluded.

Hepatitis can last for years without any symptoms, but it can cause real liver damage during this time. The most common symptoms of liver problems are stomach pain, itching, and fatigue, which can be ruled out like many other ailments, such as allergies. This is why it is very important to pay attention to the color of your eyes and tongue: if you notice that they are yellowing, you should seek medical attention immediately.

The thyroid gland is a very important part of the body because it controls many hormones. When the thyroid gland is inactive (hypothyroidism), you may experience symptoms such as weight gain, sensitivity to temperature and fatigue, which can often be confused with conditions such as depression.
Another thyroid problem is when it is hyperactive (hyperthyroidism), resulting in weight loss, irritability and a rapid heartbeat. These symptoms are also very common for many diseases such as high blood pressure. That’s why it’s important to control your thyroid hormones.

Gluten is mainly found in wheat and some other cereals. According to doctors, about 83% of people with this disease are undiagnosed or misdiagnosed with other conditions. The reason is that symptoms vary from person to person and are very common for other diseases of the gastrointestinal tract that can include stomach aches, diarrhea, constipation, headaches and more.

5. Lupus vs. Kidney and Lung Problems

This chronic inflammatory disease has many faces and its symptoms are often nonspecific and very different. Although it is known for its butterfly-shaped rash on the cheeks, some patients do not. Other symptoms may include fatigue, joint and kidney pain, and lung problems.
This is why it is very difficult for a doctor to diagnose it at first; in general, it only comes to mind once many other diseases are excluded.

12 health conditions that can be disguised as other diseases
Unfortunately, research has suggested that doctors often overlook or rule out the first signs of an attack. A stroke occurs when blood flow to the brain is interrupted, and this condition is often misdiagnosed with dizziness, migraines or alcohol poisoning. This occurs because the symptoms of a stroke include vision problems, speech difficulties, confusion, and impaired mental state.